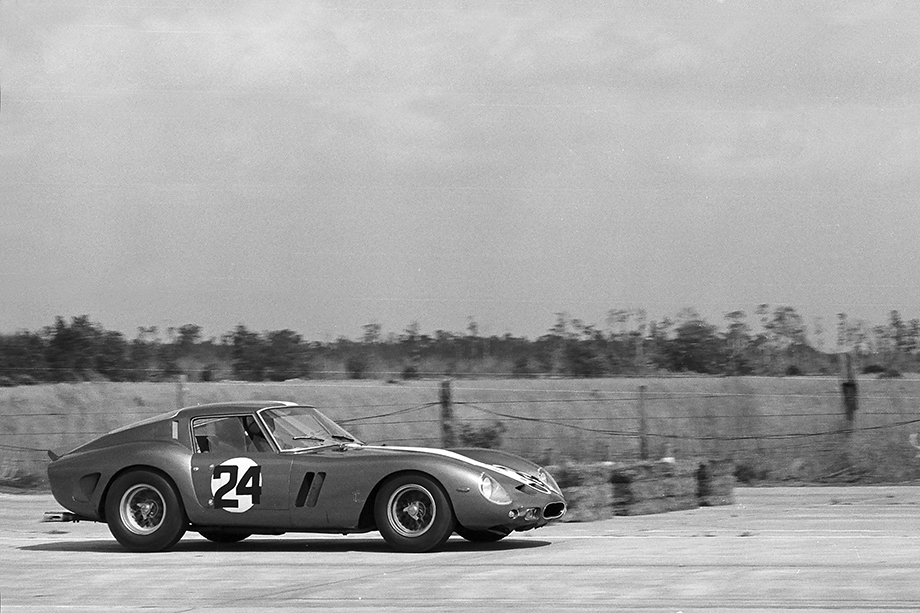 Having kept the faith for his seventh year as a Ferrari factory team driver he was to have a troubled time. After a second place at Daytona in a North American Racing Team sports Ferrari, serious FIA World Championship competition all began so well for Phil on March 24 with GT class victory – and second place overall – in the Sebring 12-Hour race.

Previously, Phil had won the Florida classic three times outright for Ferrari. The 1962 drive he shared there with his long-time co-driver Olivier Gendebien not only enhanced their racing record, it also launched the legend that is today’s immortal Ferrari 250GTO…

Here – largely in Phil’s own words as featured within his matchless motor racing monograph ‘Inside Track’ – we celebrate his initial great race of 1962 as a sample of this astonishingly cultured World Champion’s fascinating recall.

In the third week of March, 1962, in a down-scale hotel at Sebring, Florida, Phil Hill – then Ferrari’s reigning World Champion Driver – was even more uptight than usual. Discussing the situation with his long-time team-mate and frequent endurance-race co-driver, Olivier Gendebien, just seemed to confirm the unpalatability of the situation confronting them.

To be chewing his lip, worrying, bothered, to have a lightning-storm of thoughts and doubts cascading through his mind, was nothing unusual for the Santa Monica-based racing driver from California. In stark contrast, his urbane, sophisticated, languid Belgian team-mate was normally an oasis of calm, assured confidence within the Ferrari pits and garages around the racing world.

By winning Sebring in 1961, sharing their then-latest high rear-decked works Ferrari Testa Rossa Indipendenti/61, Phil and Olivier both did so for the third time in their careers – Phil non-consecutively 1958-59-61, Olivier for an unbroken hat-trick 1959-60-61.

So for 1962, when they had returned to the scene of such past success, they fully expected to start the race with yet another chance of taking a serious tilt at outright victory. Which would have meant they expected to be issued – of course – with a full-house, open-cockpit sports-prototype car capable of doing the job.

Hardly surprising, therefore, that both listened to new racing director Eugenio Dragoni expounding Mr Ferrari’s instructions for who would drive what in the race. They had not been assigned a sports-prototype, not at all.  Instead, they were to drive the brand-new Ferrari 250GTO Berlinetta…a closed-cockpit heavyweight, a GT-category clunker….and a beautiful one, certainly, but oh come on … ?

Phil Hill: “After winning the World Championship at Monza…(when his sole rival for the title, his German team-mate ‘Taffy’ von Trips had been killed in a second-lap accident) I didn’t drive in anger from the Italian Grand Prix in September to the Daytona race the following February – five months. I asked myself a lot, should I retire?  If I did, what would I do? If I continued racing I wondered how long I could go on chancing my luck. Trips’s death had come closer than I really liked to admit. I had little contact with Ferrari, but heard what to me was the shocking news that tensions within Maranello had come to a head in my absence – and suddenly The Old Man had fired all his top management.

“Engineer Chiti, team manager Tavoni, engineer Bizzarini who had been developing the new 250GTO model, and the commercial managers Gardini and Manicardi – they had all gone. The Old Man’s wife – Signora Laura – had been taking increasing interest in the race team and had attended several of the Grands Prix through ’61, supposedly acting as her husband’s eyes and ears.

“I’d never paid much attention – just focused on my own job – but it was obvious her involvement placed increasing demands upon the senior staff. Richie (Ginther – Phil’s long-time friend and recently appointed, upon Phil’s recommendation, as team test driver) had told me of increasing anger and resentment within the factory. And after Monza it all came to a head. The top guys decided to tell The Old Man they could no longer work under such conditions – in effect unless she was kept out of factory affairs they would resign. There was a bunch of other old issues also involved – not least the devoted hours they gave him, in return for such poor pay. I guess that was the fatal factor.

“So he fired them all, on the spot.  He had always – almost insidiously – accumulated strength in depth.  And now he promoted some young guys to replace them all. A tall young engineer with eye-glasses replaced Chiti as chief engineer of the race team. This was Mauro Forghieri. And with Tavoni gone, Dragoni was appointed as unchallenged Direttore Sportivo.

“At that little luncheon we’d had after the Monza accident – when Ferrari played on my sympathies like the virtuoso he was and roped me in – if I’d known then that Chiti, Tavoni etc would not be around for the 1962 season, I would never have signed up again. I never even dreamed they wouldn’t be there, and when The Old Man offered a pay rise – he actually doubled my money – my decision seemed totally justified. Maybe I was suckered in, but at least he was paying for it. When I did learn of the firings at Ferrari, I was outraged by his decision.

“I couldn’t believe that it really had happened…while Ferrari began really hounding me to sign that new contract. I just refused until they made some changes – but this was really some clumsy kind of gamesmanship on my part.

“But BRM were still wooing me, while Ferrari began really hounding me to sign a new contract. I just refused until they made some changes – but this was really some clumsy kind of gamesmanship on my part. I went to England mid-winter to meet the BRM management in their factory at Bourne in rural Lincolnshire. Raymond Mays – who had co-founded ERA there pre-war and then BRM just post-war – introduced me to his 90-year old mother who was in bed – a great dame of English society. It was a typical British slightly eccentric and wacky set-up, but the new V8 Formula 1 car they had introduced at Monza looked to have real promise. I knew it could be a real problem for our V6 ‘Sharknose’ cars, but I was expecting Ferrari to come up with something new and at least equal for this new season.

“They had flown me over and sent a guy down to collect me from London Airport. He then drove me up to Bourne in a Ford Zephyr. It rained and he drove so damned fast he was slithering and sliding around. I’d just got off the jet and here I was trying to get out of the line of fire in every turn.  I was trying to escape this alarming reality by trying to sleep while this guy was doing his best to keep me awake – wide awake.

“I was viciously jet-lagged. I talked all around the issues with BRM, but tried to keep my options open. In reality this was a very rare instance of me playing some kind of primitive politics with Ferrari.  I was seeking to enhance my value.  Finally I did the decent thing by BRM, told them I would not be joining them, but recommended Richie Ginther instead. So he moved from Ferrari – for a lot more money – and would spend three years with the British team.

“Tavoni had kept on trying to get me to sign a new Ferrari contract before he was bundled out the door… Regardless, with a cable correspondence flashing to and fro between us, it was a long winter until February 11, when I shared a Chinetti-entered Dino V6 sports-prototype with Ricardo Rodriguez in the 3-Hour race at Daytona. We finished second behind Dan Gurney’s Lotus 19 which was just lighter, faster and – not uniquely for a Lotus – broke only on the last lap and coasted across the finish line.

“Sebring was late in March and I still hadn’t agreed the new contract for 1962. Ferrari was making it difficult for me. And at Sebring – maybe it was food for my paranoia – they ended up putting Gendebien and me in a car that had little chance of winning overall, the brand-new Ferrari 250GTO.  Our reaction was that it was only a Gran Turismo for crying out loud! We wanted to be going for another outright win in a sports-prototype, not this thing which could only hope to win its class.

“It was at Sebring that I finally signed my contract – I wouldn’t have got to drive there otherwise.  The new GTO was in NART colours, blue with a white stripe.  Gendebien and I were really annoyed at first that we were in that car. He stayed annoyed, but I didn’t so much – I really wanted to run that race, regardless. The 12-Hour race’s stature had increased immensely over the years , and I regarded it as almost a part of our American culture.

“Then the GTO proved to be a great-handling car, which just drove away from the old Short-Wheelbase Berlinettas it was replacing. I didn’t like its gearbox, and it was more a kind of comfort car than a true race car. In contrast the sports-prototype cars’ gearbox was so nice, you could just throw it from gear to gear – maybe you’d get a little crunch now and then but you could just snatch it through. Even in the middle of a corner you could throw it into another gear and be confident it would engage instantly without spoiling the car’s balance, or at least maybe contributing to the attitude change you wanted to induce at that moment.  In comparison the GTO shift was just slow and ponderous – about double the time with the Porsche baulk-ring synchromesh, and the shift lever knob was way up high.  If you had a background in GT racing it was glorious, but compared to the previous model it was not in my mind quite as nice. I didn’t like it.

“But then we finished second in the race ahead of everything else except Count Volpi’s front-engined Testa Rossa driven by Bonnier and Bianchi. We had no problems at all with the GTO. It was just not as fast as the prototypes, except out of slow corners where it seemed much better-running than they were. Maybe this was due to its six carburettors not being in such a high state of tune as the prototypes, but after my stints I really got to the quite admire the car, apart from its gearshift…

“We had really wanted to win outright, but by winning the GT Category I felt we did a pretty good job anyway, and in the end Gendebien was pretty satisfied too. Because the primary FIA World Championship was by that time for Gran Turismo cars, the GT prize had become the main trophy for the whole race. But I didn’t appreciate that this would be my last Ferrari drive at Sebring …”

Such evocative insight, such depth, is typical of Phil Hill’s ‘Inside Track’. To see more, to see samples of the World Champion’s outstanding contemporary photography and to order your own copies of the finest-quality World Champion Driver’s book ever published – please click on the links below.