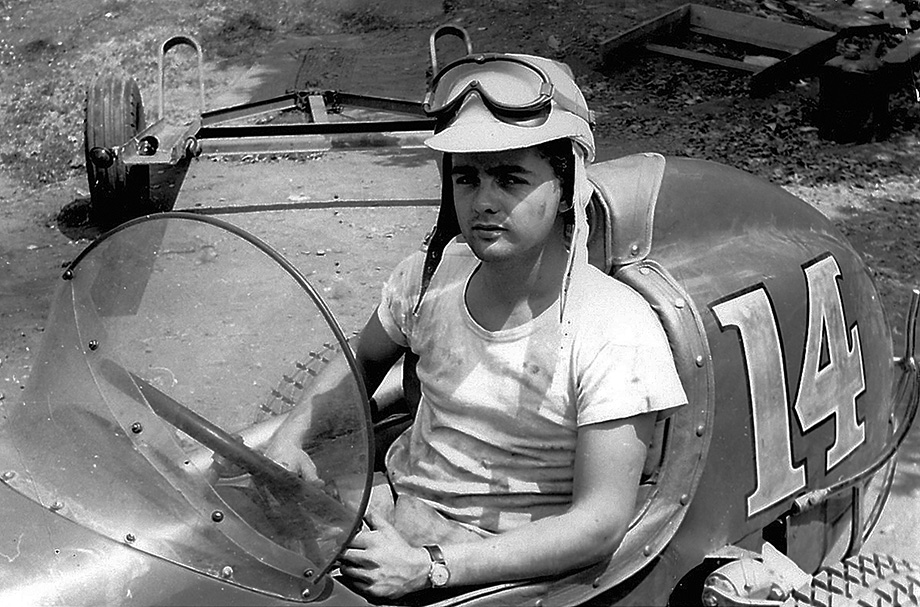 America’s first Formula 1 World Champion Driver was a terrific sports car specialist, a very competitive Grand Prix racer, a good practical engineer and one of the few totally sincere men ever to achieve real fame in world-class motor racing. Like his long-time Ferrari team-mate, Englishman Mike Hawthorn, he was a real motor car enthusiast – a genuine, right from the core, complete ‘car guy’… He knew them, he studied them, he loved them, and he drove them awfully fast – but with abiding mechanical sympathy.

Phil Hill’s father was – from very early in Phil’s life – postmaster of Santa Monica, California, and Phil’s early passion from school days was the motor car and motor racing. He voraciously devoured every motor racing magazine and book he could lay his hands on. “I was immersed in a passion for it all”, he would recall. “And even before I ever got to drive anything serious I was completely captivated by the romance of everything I’d read about it, of the great Mercedes and Auto Unions, of Caracciola, von Brauchitsch, ‘Tim’ Birkin and his Bentley, Wilbur Shaw and his Indy-winning Maseratis. Everything about all of it … I was a fan.”

Phil was orphaned when still quite young. He grew up as a quiet, rather tense personality although in his later years, when described as being highly-strung and excitable, that very description was one of the few things liable to light him up like a fire alarm. “Highly-strung! Highly-strung! Wouldn’t you get darned highly-strung if the magazines keep saying you’re highly-strung? But…” he might add with a mischievous glint in his eye and a typical chuckle, “… just don’t offer me coffee!”

Phil offered his services as a mechanic in return for ‘sponsored’ drives and, in 1952, Allen Guiberson entered him in a Ferrari for the legendary Carrera PanAmericana open road race through Mexico. He finished sixth. Back there in the 1953 race, he and his riding-mechanic friend Richie Ginther were lucky to survive a sizeable roll-over accident. Phil thought of retiring, but earned an OSCA drive at Le Mans and returned to Mexico in 1954 when – again with the intrepid Ginther at his side – he finished an impressive second.

Through Ferrari’s American East Coast importer, Luigi Chinetti, Ferrari invited Phil to Le Mans for 1955, but the disaster there – following so soon after Indy Champion Bill Vukovich’s fiery demise at the Speedway – again prompted this intelligent man to consider retirement. Maybe he should remain a good mechanic – maybe this racing was just not a sensible course to steer?

But, by that December Chinetti had him back in harness, winning at Nassau in the Bahamas Speed Week. Then the veteran Italian-born wheeler-dealer persuaded Mr Ferrari to give Phil a factory drive with Olivier Gendebien in the Argentine 1000Kms race of January 1956. The new pairing promptly finished second, and a full works-team place –based in Italy – followed.

Phil lodged in Modena, rapidly learned the language and became a fully-fledged works sports car race and test driver. As such he was extremely successful. In 1958 he became the first American ever to win the prestigious Le Mans 24-Hour classic, but he also became increasingly frustrated that Enzo Ferrari seemed to see him only as a sports car pilot, and not as a driver with genuine Formula 1 potential.

Phil really wanted to measure himself against the gauge of Grand Prix racing. That was what he had read about, and dreamed about, since he was a diffident, parentally-suppressed and dominated kid in Santa Monica. What had been his escape then, had actually drawn within reach now. Mr Ferrari agreed he should have a single-seater works drive in the Monzanapolis 500 track race – against Indy-style USAC opposition – and he finished strongly, third, driving a special Ferrari single-seater.

He then took a chance to establish himself more emphatically – ignoring Ferrari team manager Tavoni’s best advice – and risking Mr Ferrari’s wrath – by driving Jo Bonnier’s private Maserati 250F Formula 1 car in the 1958 French Grand Prix at Reims-Gueux. He finished seventh. Ferrari’s last Italian star driver, Luigi Musso, had crashed during that race on the high-speed, narrow and deceptive Gueux curve after the pits, and was killed. Ferrari subsequently made-up team numbers by asking Phil to drive the works’ Formula 2 entry in the following German Grand Prix at the Nürburgring.

Phil’s serious Formula 1 Ferrari debut followed in the 1958 Italian Grand Prix at Monza, which he led before finishing third. In the Championship-deciding Moroccan Grand Prix he set the pace before stepping back, following team orders, and allowing Hawthorn to finish ahead of him – second – to secure the world title. Mike Hawthorn paid him great tribute – Mr Ferrari was, at last, impressed – and so were Phil’s many supporters and friends, their belief – and his – fulfilled.

In 1959 Phil Hill found his Formula 1 feet, but Tony Brooks was the Italian team’s star that season and the cool, cultured Englishman was faster in a Formula 1 car, although not in a sports car. Into 1960, and the front-engined V6 Formula 1 Ferraris were obsolescent, but Phil was always aggressive and rapid. He won the Italian Grand Prix in the absence of top-line British team entries – due to a boycott on the grounds that the part-banked Autodrome circuit was unacceptably dangerous – and with this victory Phil became the first American winner of a Grande Epreuve motor race since Jimmy Murphy had won the 1921 Grand Prix de l’ACF at Le Mans. Significantly, Phil was probably the only world-class racing driver of his era who would have realised that, who knew exactly who Jimmy Murphy had been, and even moreso knew a great deal about that 1921 Duesenberg car …

But then the Formula changed for 1961, and 1 1/2-litre cars replaced the old 2 1/2-litre class. Ferrari had long been developing pump-petrol-burning 1500cc V6s through Formula 2, and the team’s new, rear-engined ‘Sharknose’ cars for 1961 simply out-powered all opposition. Even so, winning in these cars was no sinecure as their chassis were primitive by the fast-accelerating standards of the time, and their suspension geometries ‘challenging’, as Phil would put it.

The frantically gum-chewing Hill and his urbane, aristocratic German rival ‘Taffy’ von Trips came to fight out the Drivers’ World Championship between them. Phil just loved high-speed circuits and won handsomely in the Belgian GP at Spa, but Trips won at Zandvoort and Aintree. The title lay between these two in a dramatic deciding race: the 1961 Italian Grand Prix on Ferrari’s home ground at Monza.

Trips started that race on 33 points to Phil’s 29. But on race day Phil led all the way, while Trips collided fatally with Clark’s Lotus on the second lap, and his crashing car killed 14 hapless spectators simply caught standing in the wrong place, at the wrong time. Phil Hill – the thinking man’s racing driver – became a shock-numbed Formula 1 World Champion, but America’s first Formula 1 World Champion nonetheless.

His sports car racing record, meanwhile, was sublime. Through an era in which sports car competition was not only physically, mentally and mechanically demanding – and by modern standards supremely dangerous – Phil’s touch, and feel, and common-sensical sense of pace – in short, his intelligence and hands-on experience – would win three Le Mans 24-Hour races in works Ferraris that he shared each time – in 1958, 1961 and 1962 – with Olivier Gendebien.

And he won three Sebring 12-Hours, and two Buenos Aires 1000Kms in Argentina, and two ADAC 1000Kms on the Nürburgring Nordschleife circuit in West Germany and more …

During 1962, however, the British multi-cylindered opposition in Formula 1 simply routed Ferrari’s suddenly outmoded, agricultural V6s, and a scintillating, fighting drive into second place at Monaco was Phil’s sole highlight of that season.

He left Ferrari at the end of that year to join former Ferrari Chief Engineer Carlo Chiti’s new ATS team. It proved for him a catastrophic decision, which effectively wrecked the later years of Phil’s career. He drove GT cars for Porsche and Aston Martin, and in 1964 joined Cooper in an unfulfilled and unfulfilling Formula 1 partnership in which he and the declining British team never gelled.

He also became a pioneer of the Shelby American Cobra and Ford GT programmes, aimed at wresting Le Mans 24-Hour race domination away from Ferrari, and ultimately at stripping the Italian marque of its FIA GT World Champion status. While in Formula 1 nothing seemed to go right any more for Phil, with Ford his initial technical input was great, and once the starting flag had dropped, despite initially dire mechanical unreliability, Phil’s blazing ultimate speed was never left in doubt.

But Ford bureaucracy got to him. In 1965 he forged instead a good relationship with Jim Hall’s Chaparral team – powered by GM Chevrolet engines – and then shared the beautiful Chaparral 2D coupe with Jo Bonnier in Europe, winning the Nürburgring 1000Kms. He also drove for Ford GT team-mate Bruce McLaren’s emergent personal team in the 1965 Tasman Championship series ‘down-under’ in New Zealand and Australia, shining in the final round at Longford, Tasmania, in what would prove to be his single-seater racing swan song.

He won a CanAm sports car round in the winged Chaparral 2E and then returned to Europe in 1967 with the magnificent winged Chaparral-Chevrolet 2F coupe. On July 30, 1967, Phil co-drove the radical 2F with Mike Spence to win the BOAC Six Hours at Brands Hatch, England, and with this great victory to his name he retired at the top with fine-timing and typically good grace.

Through his sixties and into his seventies Phil Hill remained a fine and immensely capable driver, and even as the Goodwood circuit in England reopened for historic racing in September 1998, Phil Hill – America’s first World Champion racing driver – was there, battling with the best of them in a Shelby Cobra Daytona coupe.

And in the final years of his incredibly active and successful life, Phil Hill became in effect the elder statesman of the American vintage and classic car movement. As a supremely knowledgeable Packard specialist, he had been a hugely valued judge for many years at the prestigious annual Pebble Beach Concours. Through the late-1990s into the 2000s he became a founding presenter of the biennial Collier Connoisseurship Symposia in Naples, Florida, and the affection and respect in which was held by fellow ‘car guys’, the world over, was truly unsurpassed.

In his final years Phil Hill worked hard, downloading his memories and observations upon his World Championship-winning racing life into what is now to be published as ‘Inside Track’. For much of his career he had indulged his innate interest in photography by shooting mainly Kodachrome colour slides of the races he attended, the sights he saw, simply to share “…with the folks back home”.

For decades these beautifully composed, professional-standard slides remained carefully boxed and stored within his Santa Monica home, seldom touched, even more seldom shared and seen. Now ‘Inside Track’ presents this outstanding archive to the worldwide public, for enthusiasts to share, and to savour. All supported, of course, by the first-hand racing story of Phil Hill – the thinking man’s great racing driver.